A hobby is an activity or an interest that creates relaxation or pleasure. It’s important to have a distraction from our regular responsibilities. It helps us unwind. We get to focus on something enjoyable or amusing in our leisure time.

When he was a young boy, growing up in an impoverished Brooklyn ghetto, he was fortunate to have a neighbor who was a retired professional clarinet player. Mr. Rosenbaum, in his youth, had played with the philharmonic orchestra in New York City. It was ironic that he should find himself in an all Latin very poor neighborhood.

All of the tenement buildings in the neighborhood were 6 stories high with 4 apartments on each floor. If you weren’t familiar with the area you would assume it was some type of confinement camp. The buildings were a dreary chalk grey.

It was a struggle for Mr. Rosenbaum to climb up and down the concrete stairs to do his errands. Like many elderly people, he did without many things because of it. He was in his late 70’s. He was in need of help.
One day, he saw this 7 year old boy playing a game of skully on the sidewalk.

Skully (also called skelly, skelsy, skellzies, scully, tops or caps) is a children’s game played on the streets of New York City and other urban areas. Sketched on the street usually in chalk, a skully board allows a game for two to six players. A sidewalk is sometimes used, offering greater protection from vehicular traffic; however, the asphalt on a typical city street is smoother and provides better game play than a bumpy cement sidewalk. Information from Wikipedia

Mr. Rosenbaum approached the boy and asked if he’d like to learn to play the clarinet.

(Obviously, this was before – Stranger Danger – or – Never Talk to Strangers)

“What’s a clarinet?” the boy asked.

This boy who always needed to be occupied and loved challenges agreed to run errands for Mr. Rosenbaum in exchange for clarinet lessons. The boy’s mother was surprised that this professional musician would share his talent with her son. They weren’t able to afford an instrument. His lessons were his only means of practicing. He joined band several years later in grade school. Finally, he was able to have a clarinet to enjoy at home. He picked up an interest in other instruments along the way and became proficient in trumpet, cornet and saxophone.

Mr. Rosenbaum had exposed him to classical music. The impact of their brief encounter influenced his love for all types of music but in time his love of jazz rose to the top as his favorite.

The boy who was now turning into a young man continued to run errands for Mr. Rosenbaum until he was taken away to a nursing home. He never saw him again.

A man in need shared his gift of music and showed an underprivileged boy that in helping others you can change a life. *****

Copyright 2014©written and photography by Isadora

***** The boy later saved a child from a gunman and became the highest decorated policeman in the NYPD in 1994. He was awarded the Medal of Valor by Mayor Abe Beam.
***** I am working on his memoir. 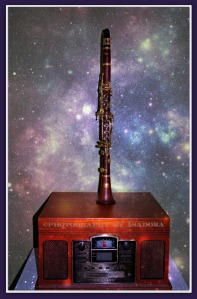 Description: Every Tuesday Frizz offers the “A to Z challenge”, walking step by step through the alphabet – to join in – http://flickrcomments.wordpress.com/2014/02/25/tagged-h-2/

Weekly Writing Challenge: Object – to join in the challenge –
http://dailypost.wordpress.com/2014/02/24/writing-challenge-object/