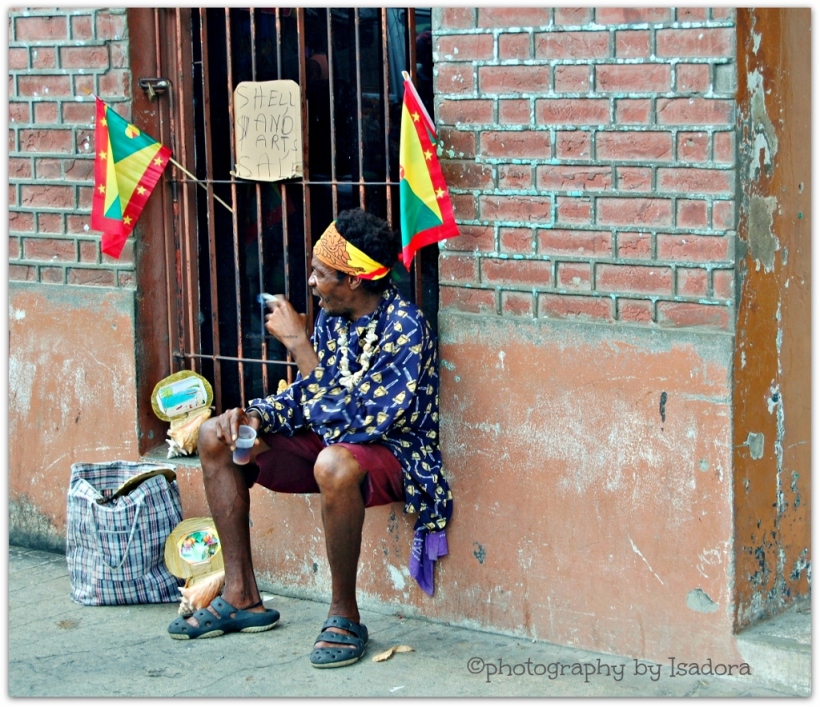 While on vacation in Grenada, we decided to drive around downtown which can be a challenge. Suddenly, I was overcome by the sight of a man sitting on the sidewalk.

Startled, my husband stopped the car assuming he was going to hit something or someone he hadn’t seen.
I said, “Look”, while pointing to this man. “Please!” “You must find a place to park”.

He drove a bit and found a parking spot.

Since we were unfamiliar with the downtown area we had to walk several streets in search of where the man had been.

I thought I should purchase one of those shells he was selling since he looked like he was in need of a sale.

Eventually, we found him.

He was unaware I was standing next to him until I said, “Hello, I see you have some shells for sale”.
Tear filled hazy eyes glared at my face. I felt sucked in by his sadness. He was dirty with a profound odor of the unsanitary kind. It was the type of odor you knew was from a lack of any type of facilities. Yet, I felt compelled to talk to him. In one hand he had a cup of rum; the other hand held a blunt, doobie, marijuana joint. Drugs!

After briefly talking about his shells, I told him, “I noticed he was drinking and smoking marijuana at this early morning hour”. It was 10:00 a.m.

He said, “There’s no set time for me to kill my pain”.

I didn’t dare ask what his sorrow was. I asked, “Does it help your pain?”

No words were said. Just a tilt of the head in my direction with a curved smile that led me to believe he didn’t think I’d understand.

We spoke for a short time.

I handed him the money for the shell with a little extra. I recommended he use it for food or shelter. I told him to keep the shell so he could sell it to someone else.

As I began to walk away, he took another puff from his big sweet scented herb and shouted, “Pretty Lady” …

He continued, “Someday, when you get to heaven say hello to my angel. I know you’ll meet her there. Tell her, I’ll be with her before long”.

Definition of Broken: forcibly separated into two or more pieces; fractured. incomplete; being in a state of disarray; disordered;

Street Life/Slice of Life: A photojournalistic photograph, camera as observer.